The Fig Tree Bay is situated in the center of Protaras village and is only a few miles from Ayia Napa village. It took its name from the many fig trees that gave shade to locals before the area got popular with tourists.

It is a unique beach with long fine, white sand and clean, shallow water. Over the weekends, the beach gets busy with locals and their small children. The small rocky island a short swim away and the blue – green water all contribute to the idyllic setting. Furthermore, the beach is well equipped with restaurant and water sport facilities.

Adonis Baths Water Falls are located in Koili village very near Paphos area. This area is well known for the unique mini lake that is created from the river of Mavrokolymbos.

Through the years, a small water fall was created with a beautiful green mini lake. Many tourists are visiting this place to make photos.

Swimming into the lake is allowed but there is entrance fee. Nice place to visit though.

Trooditissa monastery was originally founded in the 13th century, but the present church was built in 1731. It is situated on the southern slopes of the Troodos Mountains and it is between two large villages, Platres and Prodromos. Around the monastery there are beautiful pine, walnut, cherry and apples trees. The distance from Limassol is about 44 km and an hour drive. It is also important to know that the church contains a priceless silver-plated icon of the Virgin Mary brought from Asia Minor.

The monastery was revived after it came close to being dissolved in the 19th century by Monk Damaskinos (1939 – 1942) and his success or Abbot Pangkratios,

Every year, on the 15th of August, a large religious fair is held on the grounds of the monastery. This is the day of the Dormition of Panagia. Childless families visit and pray to the holy icon of Panagia, to give them hope to have children.

Coral bay is one of best beaches in Paphos. It can be found towards the road of Pegeia village and it is a U shape beach. Small rocky landscape is on the left and right of Coral bay.

Due to its location, it is very easy for people to approach with all the means of transportation, car, motorbike, bicycle and bus.

Coral bay can provide its visitors with water sports facilities, sun beds and umbrella. All these are available under a small fee for rent. Lifeguards are also on duty in the summer months.

Last but not least, in the area there are accommodation facilities and lots of restaurants and bars to enjoy a good meal and a drink.

The Archaeological Area of Amathounta

It is located east of the city of Limassol and it was considered one of the most important and one of the largest cities in ancient Cyprus.

Over the centuries, Amathounta was conquered and ruled by different civilizations like the  Eteocyprians, Greeks, Phoenicians, Persians, Ptolemies, Romans and Byzantines.

Furthermore, the central city of Amathus had two main levels: the lower which was the (agora) and the upper city named (acropolis). Lower level included also the Public Baths and the Fountain Complex.

A nice and significant place worth seeing!

The Medieval Castle of Limassol

In the heart of the town’s center, near the old city harbor, one can find the imposing Castle of Limassol; a historical monument that holds a rich historical background.  Tradition wants the Castle of Limassol as the venue in which Richard the Lionheart, the King of England, got married to Berengaria of Navarre, in 1191. However, the exact time of construction is unknown as it cannot be accurately determined by historians and scholars. According to Etienne de Lusignan, the construction of the castle was completed in 1193 under the reign of the founder of the Lusitanian dynasty, Guy de Lusignan. However, the first official, historical reference of the castle is dated in 1228, during the involvement of Frederic II of Germany in the affairs of Cyprus. Over the years, the fort suffered the assaults of many invaders, sustaining even further damage in the earthquakes of 1567 and 1568. The fortification walls are of great archaeological interest; and according to historians the remnants of the walls indicate that they were pieces of a much larger castle. Furthermore, during the Ottoman dynasty, the castle was reconstructed to its original state and form, which was considerably larger than the subsequent, as some parts of the former building, such as the two oblong halls of the ground floor, were incorporated. Additionally, below the eastern hall there is a network of crypts with cells, which was used as a prison until 1950.  Today the castle houses the Cyprus Medieval Museum. You can visit the castle of Limassol, as well as any other site in Cyprus with ease, by renting a car from the fleet of Christa rent-a-car. 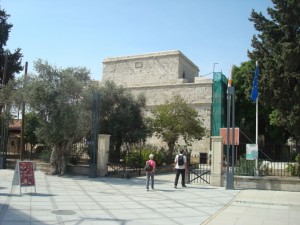 Christa Car Rentals are happy to announce the acquisition of 2 new Mazda Demio’s. The Mazda Demio (also know as Mazda2) is a sporty compact car that incorporates exceptional fuel economy whilst not compromising on fun to drive. It benefits from agile handling and improved braking performance. That’s because it’s made lighter than before.

Built with strong new materials it’s safer too. Awarded the maximum five stars in Euro NCAP safety ratings for adult occupancy, this compact car was World Car of the Year in 2008. Not only that, it’s fuel efficient with CO2 emissions as low as 115g/km.

Free GPS with any Car Rental

We are happy to announce that throughout winter we offer FREE GPS with any car rental longer than 3 days. Find your way around Cyprus with ease using turn by turn direction to get wherever you want.

Our new website has launched! It makes it easier than before to search for available cars, find the car you want and book it online. We accept payment online through paypal although new card payment methods are coming soon. If you prefer however you can phone us to pay the deposit. Rest assured that our site supports secure connections so you can browse using https. More translations are coming to help our Russian customers.